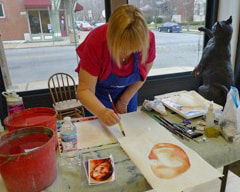 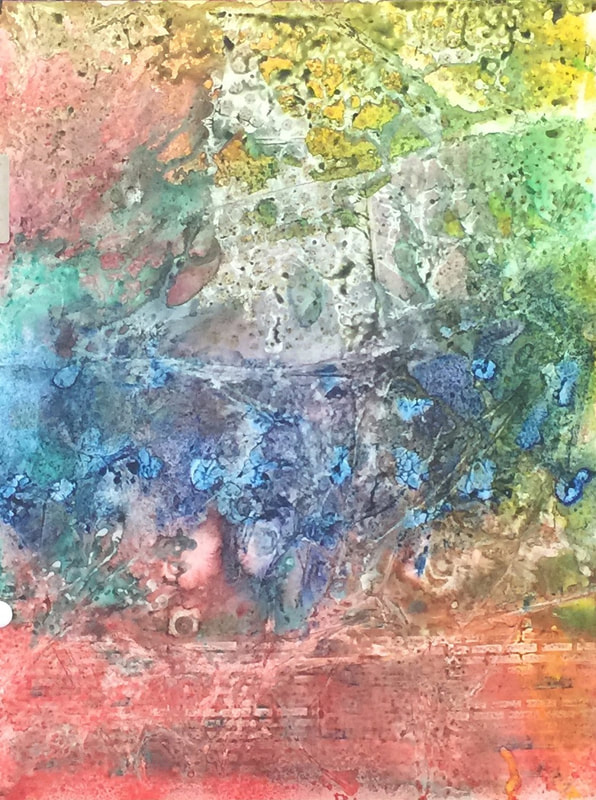 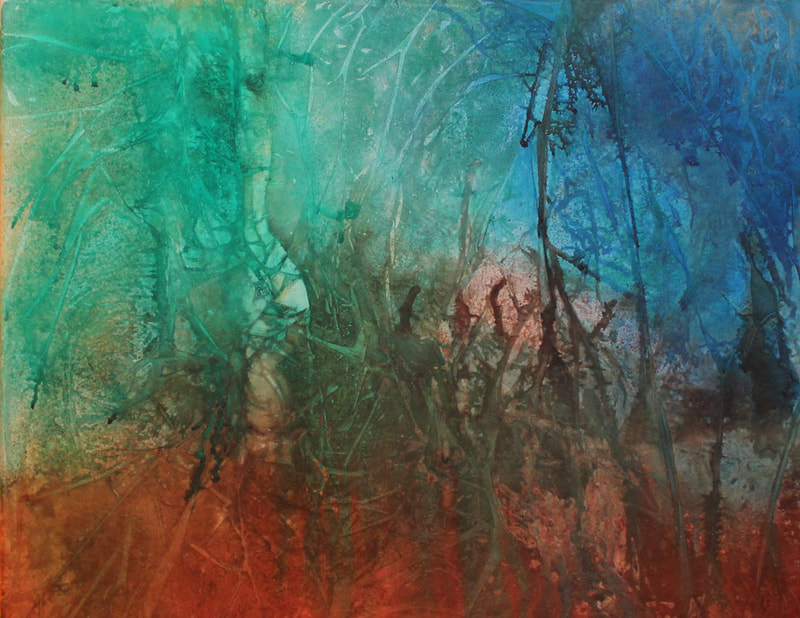 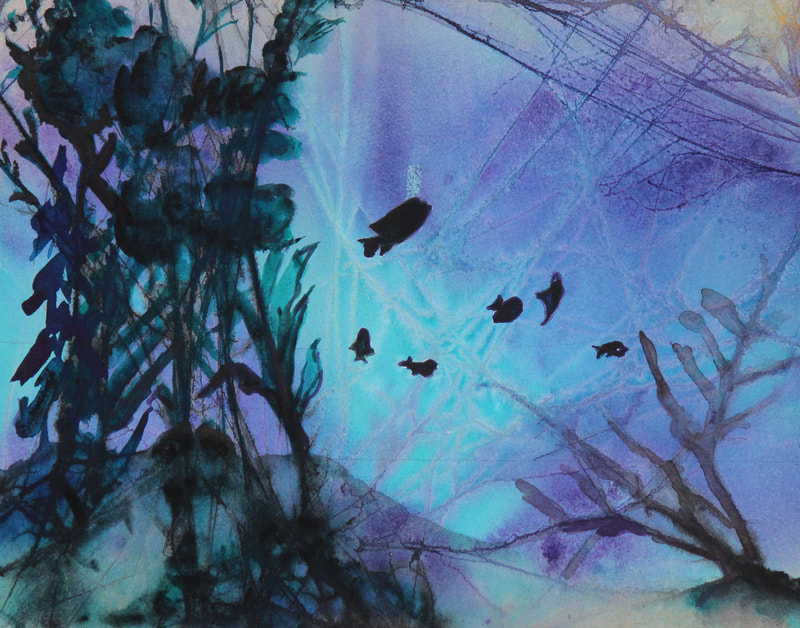 It doesn’t matter which subject I decide to paint, the initial response has to be strong enough for me to believe I can create a good design and composition. This excitement extends to when I can sit down to review the photos and the value studies from them. The blank page is always slightly daunting, so the sooner the process can be initiated the better.

I like to have a plan before I start a painting.
• Selecting the surface, e.g., watercolor paper, Yupo, Ampersand cradle, canvas, etc.
• the size., quarter sheet, half sheet, square, full sheet
• vertical or horizontal painting
• select possible color palette of 3-4 colors and
• write down the steps to approaching the different techniques I might potentially use.

I love to paint almost anything. I have disciplined myself to paint in a series or themes to create a body of work; e.g., Nature (both as abstracts and realistic expressions), memories of travels and cultures, people just being themselves, and action art in cycling races.

Some of my paintings need to be done outside because of the potential splatter and staining, particularly when I pour or spray the first layer.  This is true especially when painting on Yupo or surface sealed with gesso. I will start 2 or 3 paintings at once since there is drying time.

When dry I trace or use a light box to identify the areas of the focal point. This is the fun part when painting on Yupo because the lightest values are now going to be lifted with alcohol back to the white of the surface. At this point I will be adding acrylics or watercolor for the detail in the focal point and possibly adding some darks.

For watercolor paintings, I will first look at a value study to see the amount of detail needed when I project the image on my surface and draw in the details.  If necessary I will masque the lightest values before any paint is applied. My favor technique is wet-into-wet with many layers.

One of the most difficult decisions is deciding when is a painting finished.  It might take several days of observation in different lighting, from close up or across a room to know. Have I conveyed my passion for the subject so the viewer feels a connection?  It is important that the viewer gets your vision and feels your passion.

​
​Most of Diana’s art has been painted with watercolor on paper but in recent years she began sealing the watercolors when they were painted on AquaBord, ClayBord or canvas cradles.  The sealing doesn’t change the special look that only watercolors can achieve with their transparent qualities. The “beating “heart” of Diana’s artwork comes from the artist’s emotional connection to her subjects. Though Diana’s interests are varied, she finds painting “in a series” or themes for a period of time gives her a “body of work” using the same techniques.  Using Nature as her guide, she has been moving from representational to more abstract art.

DIANA NADAL
SHE PAINTS WHAT MOVES HER,
TO MOVE YOU

Artists find inspiration everywhere. Exciting, real life images spark creative interpretations in this artist’s imagination. The inspirations and intents of Portland artist, Diana Nadal, are captured in the quotation:  “It's not what you look at that matters, it's what you see.”
Henry David Thoreau


Diana was born in McMinnville, Oregon while her father was attending Linfield College. The family moved several times in her early childhood between Oregon and California but she grew up in Medford, Oregon.

Recalling her childhood, Diana feels lucky to have had two parents who were devoted to one another and their three children. Diana’s mother provided a creative environment at home with special “art” time and later lessons with a local artist when Diana wasn’t challenged by the school’s art program. Diana took piano lessons for most of her childhood and played for the Sunday school at her church.

College included course work over 4 years  at Linfield, Portland State, Cal State LA in Pre-Nursing and Diana attended Harvard’s Extension classes. She worked as Administrative Assistants in Los Angeles, Boston, Portland, and Seattle while her husband, Joe, was pursuing graduate school studies. They were married in December of 1967.

In 2002 while on vacation in Hawaii, she took her first watercolor class on the veranda of the Marriott Hotel. She was hooked. She enrolled in classes on her return. With the encouragement of her teachers, she submitted paintings for jurying and was accepted into the Watercolor Society of Oregon (WSO) in 2004. In 2005 she was asked to fill a vacancy on the Board. Being surrounded by talented artists she made a commitment to being a full time professional artist. Diana’s artistic training has continued through classes, workshops, and 1-on-1 private sessions with artists/teachers, marketing and software experts. Four workshops that contributed most to her growth were those by George James, Diane Maxey, Carol Carter, and Ralph Hedley.

The “beating heart” of Diana’s colorful artwork comes from her emotional connection to her subjects. She shares insights about places, people and cultures which have moved her.

Though Diana’s interests are varied, she finds painting “in a series” or around a theme gives her a “body of work” giving her artistic growth and satisfaction.

As she moved her interest from representational to more abstract art, Nature provided the inspiration for this transition.  Her interior design training is evident in her focus on buildings and structures from her travels, and she loves to paint people in their local environment doing normal everyday activities. Her most recent interest is painting the action captured during international cycling tours, especially the Tour de France each year..

Most of her art has been painted  on   watercolor papers and Yupo.  In recent years she began sealing the watercolors when painted on AquaBord, ClayBord, canvas cradles and watercolor paper.  These have been successful. Sealing doesn’t change the special brilliance  that only watercolors can achieve with their transparent qualities.

Diana’s work has been exhibited in numerous competitive art shows over the years including juried shows of WSO,  NWWS and Western Federation of Watercolor Societies.
The Fairweather Home and Gallery in Seaside invited Diana to show selected art several times a year since the Fall of 2021. She was the “guest” artist in the Fall of 2016 at the Pacific Artists Alliance gallery in Lincoln City. Her work has appeared in local shows: Beaverton Arts Mix, OSA Rose Festival Shows, Lake Oswego Festivals, and both the Beaverton and Tualatin Revolving Library Art Displays.
​
Website: www.diana-nadalart.com
Email: dianagnadal@gmail.com
Cell Phone: (971) 645-5031