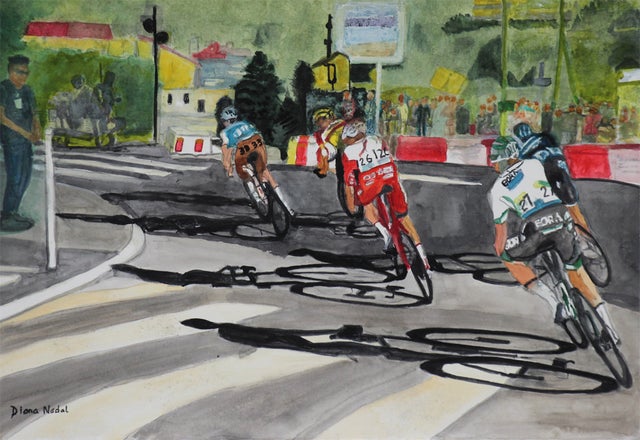 The 2020 Tour de France didn't disappoint the fans. Each day the pace was faster than expected and the drama was high. This painting was especially intriguing to me because of the shadows and it captured the movement of the riders on the corner on the outskirts of town. It was a favorite of my husband so even though there were more riders than I usually like to paint, I liked how they were in "twos"

Six cyclists were in the breakaway until 25 miles to the finish and worked well with one another the entire race, earning points on the climbs and sprints. Perez, one of the riders here, became high points for the polka dot jersey in Stage 3 but he crashed after the peloton caught them and had to leave the Tour with a broken collarbone.

This painting is in part a tribute to his effort and I felt his disappointment.

I liked the saying, "You can't win the Tour today, but you can lose it!"﻿